For many people, a bunion has been an unwelcome companion for a long time. Bunions can be a source of discomfort, pain, and embarrassment, but they are so common and lasting that so many just accept it as part of their life without taking action against it.

Brook Valley Podiatry provides help for patients with bunions, regardless of whether the deformity is just starting to form or been present for years—and surgery is often not the only option.

What is a Bunion?

A bunion is a bony bump found on the inside edge of the foot. It develops right at the base of the big toe at the joint known as the metatarsophalangeal joint (MTPJ).

Bunions are formed when the big toe presses inward due to uneven pull of the tendons and other surrounding tissues. The big toe moves toward the second toe, and causes the MTPJ to grow and stick out. As a result of this shift, the skin covering the bump might be sore and red.

Symptoms and Signs of Bunions

The bulging bump found at the MTPJ is, of course, the primary sign of a bunion. There are other symptoms as well:

The presence and severity of these symptoms largely depends on the severity of the bunion and surrounding factors, such as friction caused by footwear.

There has been a lot of talk over the years that shoe choices are the cause of many bunions, but it’s not that simple.

There is some argument over whether shoes with cramped, pointed toe boxes or high heels that force pressure against the front of the foot actually cause bunions.

A majority of foot and ankle experts believe the root cause of the deformity actually lies within an inherited abnormality in foot structure. In other words, you were likely born with an increased likelihood of developing a bunion.

However, this is does not give anyone a free pass to wear lousy, cramped, uncomfortable footwear!

Wearing high heels and other torturous forms of footwear may not be the root cause of a bunion, but they can certainly help make bunions worse. Think of your big toe joint like a fence post in unstable ground. Anything you do to lean on it will cause it to shift over time, and poor shoe choices can lean in hard.

There are other factors that can contribute to development of a bunion aside from an inherited foot structure. Damage to the joint and surrounding tissues, either caused by physical injuries or certain forms of arthritis, can also play a role. 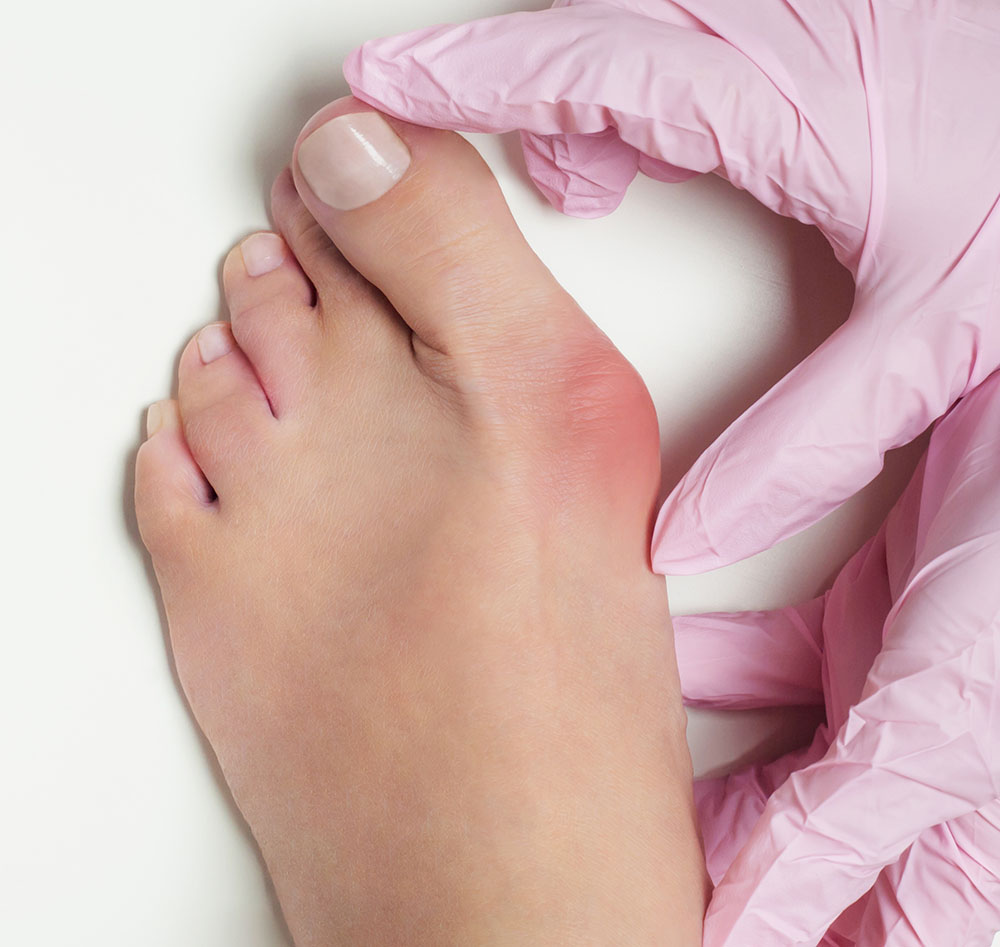 The main goals of treating a bunion should be:

A sensible first step in many cases is to start with home treatments and see if they reduce your pain. Measures might include:

If home care doesn’t help, you should receive a professional evaluation from our office.

After taking the time to fully examine your bunion and learn more about the factors surrounding it, we may recommend certain treatments. These may include medication, shoe inserts or custom orthotics, or padding to relieve pressure and pain. Taping your foot into a normal position might help, as could an icing or stretching regimen we prescribe for you.

In some cases, conservative options just don’t have the needed effects and bunion surgery becomes the best option for treatment.

The goal of bunion surgery will generally be to return your toe to a natural position and thereby relieve the discomfort. Various procedures can be performed, including removal of swollen tissue, removing part of the toe bone, realigning the bones to correct the angle, and fusing the affected bones together.

We will discuss all your potential surgical options in depth, including what you can expect from recovery, if this is the course you would like to pursue.

Children Can Get Bunions, Too

Unfortunately, the focus on high-heels and other shoes tends to detract from the hereditary side of bunion development. Although it is not as common as bunions in adults, children can have bunions, too. These are known clinically as “juvenile bunions.”

Treatment for juvenile bunions is largely similar to treatment in adults. The good news is that, being at a younger age, most cases of juvenile bunions are not as developed. The structure of the foot is also often more malleable than an adult’s, responding better to conservative treatments.

The sooner any case of bunions can be treated, the better! So if you see signs of a potential bunion in your child, do not wait and see if it gets worse. Taking action now can go a long way to keeping it from reaching that point in the first place.

Brook Valley Podiatry is ready to help you with your bunion problem. Whether we can handle it with conservative care or need to employ a surgical procedure, we will find you the pain relief you need.

Schedule your appointment with our Spring Valley office by calling us at (845) 352-7507 or using our online form today.