Protecting Your Footwork in Taekwondo, Muay Thai, and Kickboxing

Dr. Birnbaum knows at least a bit more in martial arts than you might expect from your everyday podiatrist. He’s taken a few Taekwondo classes, after all!

Footwork intensive arts such as Taekwondo, Muay Thai, and kickboxing require plenty of training, conditioning, and discipline. It’s no easy journey, and there can be plenty of opportunities for pains and injuries to the feet along the way!

Ask any seasoned professional what types of conditions they have faced, and you’re practically assured to be told of sprained toes, plantar fasciitis, metatarsal damage and other foot-related woes.

Depending on how dedicated you are and how much time you invest in training, it is almost assured you will face a foot problem at some point. The more you guide and guard yourself against these problems, however, the less likely they are to happen and the more likely you can recover from them with less downtime. 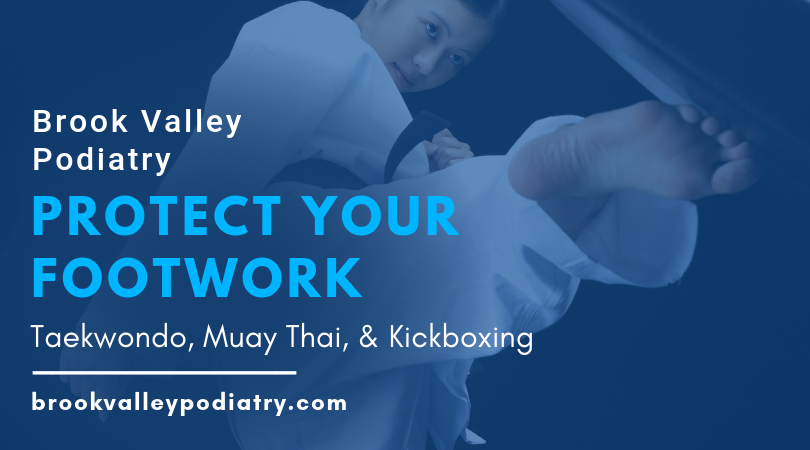 Some dedicated individuals to martial arts might balk at the idea of using protective gear on the feet at all. Barefoot or nothing!

This position has its reasons. Perhaps footwear is believed to interfere with stances or just doesn’t feel natural. If you’re used to training or sparring barefoot, wearing any type of shoe might throw off the balance you are used to.

Footwear was initially developed to compensate for the floors in most schools. Practicing and training on hard floors takes its toll on your feet, ankles, and knees. Today, most of the schools (or Dojang, Korean for training hall) have mats on the floors so there are fewer friction and toe-stubbing injuries.

Still, there are times when you will likely want to have good footwear. If you are just starting out, it is not a bad idea to provide yourself more protection while your feet are less conditioned.

The specific type of martial art you are practicing will have a significant impact in determining what type of footwear is best. Some shoes come with higher tops for added ankle stability. Others, such as sparring boots, provide added protection against the top of the foot, which can be vulnerable to impacts (whether intentional or not).

In addition to the needs of the art, however, you should also consider the needs of your own feet. Do you have high arches or flat feet, for example? Certain supports or cushioning can help avoid foot and heel pain as you engage in intensive activity.

Taekwondo shoes are relatively light and easy to slip on, which might make them a good general starting point for many people. This is something you will want to discuss with your podiatrist and teacher, however, as they might not be suitable enough for your specific situation.

Starting out with protective equipment is a reasonable call for any beginner, and can also be especially useful if you are recovering from an injury.

(However, if your doctor tells you to hold off from activity for a period of time, always pay attention to them. It might be frustrating, but long-term consequences of not letting an injury heal properly are much worse than any short-term inconveniences!)

All that said, a significant element of many martial arts is building up strength and toughness in needed parts of the body, either so that they can deliver better strikes or better absorb blows.

In many programs, this means occasionally working without protective gear. In Muay Thai, for example, shins are often conditioned through bare strikes against bags or pads. Gradually, these impacts will build resilience in the shins so they can better shield against blows. 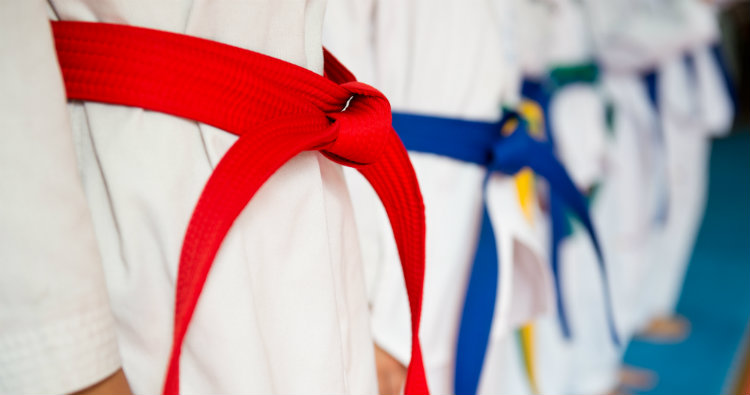 The key in this approach is patience. Conditioning of any form, from strength to endurance to resilience, is best performed at a slow but steady pace over time.

While our bodies are amazing at building themselves up to meet the demands we place on them, they are not invincible. Give the body too much punishment at once and you are only inviting an injury.

Some damage is almost always going to happen sooner or later, as well. When it does, listen to your body and give yourself a chance to rest. This might mean going back to full-time guards for a while, or temporarily reducing your training time in that area.

Trust that, in the long run, this advice will allow you to train more and better!

One of the less direct sources of pain martial artists can face is plantar fasciitis. It is not caused by sparring as much as motions or impacts that overly strain the bands that support our arches. If you practice a form that involves spending a lot of time on the balls of the feet, your odds of developing pain through this condition are higher.

Stretching your calf muscles and toes properly can help keep your plantar fascia in good condition, however. Such exercises involve heel raises, gently pulling back the toes toward you until you feel a stretch, and scrunching your toes to pick up items like marbles and towels.

If you do have heel pain, ice can help. So can a massage from rolling a tennis ball, golf ball, or foam roller beneath your foot.

The Art of Foot Care

Martial arts take determination, discipline, and mental fortitude. However, that does not mean you must endure more pain in your feet and ankles than you need to. That’s just foolishness!

If you are struggling with persistent pain or discomfort, it is always worth pursuing treatment. The guidance of Dr. Birnbaum and the staff of Brook Valley Podiatry can help keep foot conditions from being a distraction or an outright detriment to your training!

Call our Spring Valley office at (845) 352-7507 anytime you would like to request an appointment. You may also use our online contact form anytime you have questions, and a member of our office will reach out to you.