Get Your Fungal Nails Ready for Summer with KeryFlex

If you have an ongoing fungal nail infection, we don’t have to tell you how embarrassing it can be. You already know.

And with summer approaching yet again, you might be thinking, “Ugh, not this again.” Time to make some tough decisions. Keep your feet locked away in shoes and socks, even in the sweltering heat? Or bring out the sandals and risk the funny looks?

Well, we’ve got good news for you. You don’t have to choose.

If you want your healthy, natural-looking nails back, you can have them right away, in just one visit. And you can file them, paint them, and show them off like any other nail. You don’t have to bury them in shoes or cover them up with cheesy artificial nails.

It’s called the KeryFlex nail restoration system, and it’s a quick, safe, and easy cosmetic procedure we’re happy to provide for our patients alongside our medical treatments. 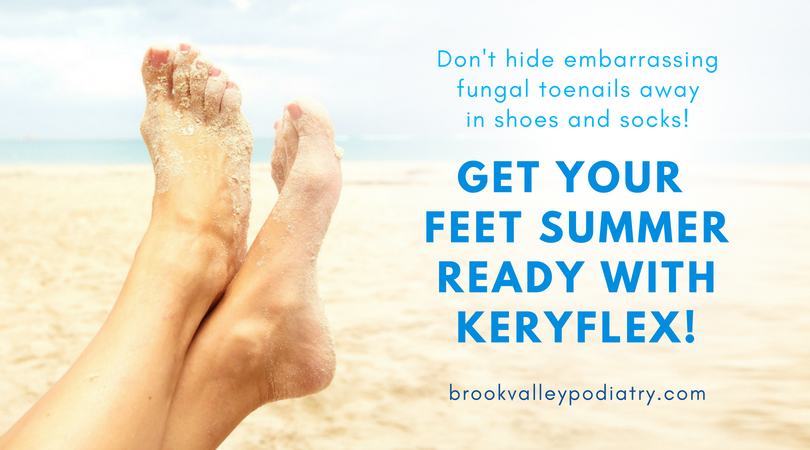 The Long and Slow Road Back from Fungal Toenails

So here’s the problem.

One the one hand, toenail fungus is actually very treatable, and treatment technologies have come a long way in the last decade or so. Our laser therapy system is highly effective at eradicating the fungus, and can do so much more safely than traditional oral treatments.

But there’s a catch:

Simply killing the fungus won’t make the ugly, yellow, unsightly nail go away. The damage to the existing nail is done. To get your healthy and clear nail back, you’ll have to simply wait for the new nail to grow in.

That can take months—even up to a year, depending on how slow your toenails grow.

In other words, if you’re just now thinking about treating your fungal toenails for the warmer weather, you’re already too late.

At least, you would have been, if it weren’t for KeryFlex.

The KeryFlex nail restoration system restores your nail’s healthy, natural appearance by bonding an artificial nail made from a medical-grade resin to your existing natural nail.

Now, ordinarily, covering up a fungal nail infection with a fake nail—made from, say, acrylic—would be a seriously bad idea. These consumer-grade artificial nails can trap moisture between the artificial and natural nails, which can make the infection worse. They also don’t bend with the natural movement of the toes, and they require irritating acids to apply.

By contrast, KeryFlex is non-porous and non-permeable, and bonds firmly to the natural nail—so it won’t trap damaging moisture. It bends with the natural movement of the toe, so it won’t damage the nail bed underneath.

From a cosmetic standpoint, you can paint a KeryFlex nail like any other toenail. It’s unaffected by polishes or detergents. You can also file them with a nail file or emery board (we do not recommend you use a nail trimmer).

And most importantly, from a medical standpoint, KeryFlex won’t get in the way of our efforts to treat the fungal infection—even laser therapy. The laser energy passes right through the resin nail without a problem.

In other words, while it’s important to remember that KeryFlex is not itself a treatment for fungal nails,  you can get the benefits of a healthy nail right away as we work to eliminate the infection permanently. 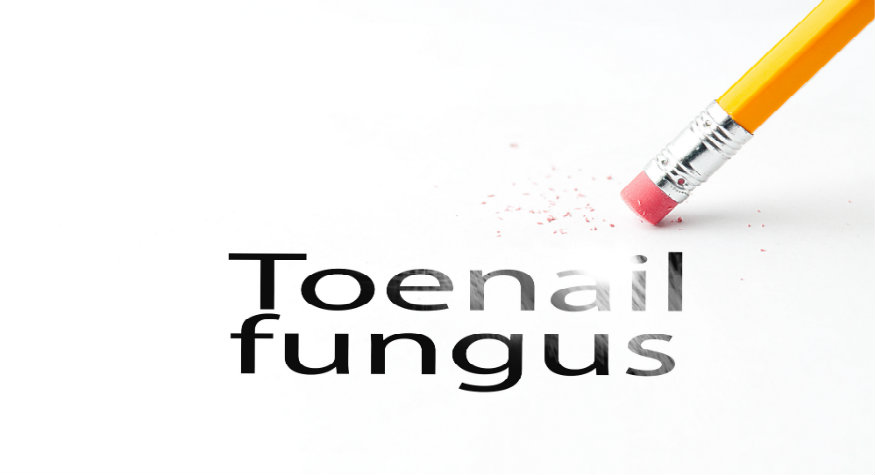 What Can I Expect During the Appointment?

During your appointment, we’ll take you through a sequence of steps:

From start to finish, the whole process can take as little as 15-30 minutes, depending on how many nails you need to reconstruct.

Generally speaking, the cosmetic benefits of KeryFlex will last for about 6-8 weeks before more resin will need to be applied. You can repeat this process as long as necessary until the infection is cured and the new, healthy nail has replaced the damaged portion of the natural nail.

Is KeryFlex Right For Me?

Not everyone is a good candidate for KeryFlex. If you have peripheral vascular disease, peripheral neuropathy, arterial insufficiency, or ingrown toenails (among other conditions), KeryFlex is not recommended. The same goes for pregnant or nursing mothers.

In rare cases some people have been known to develop allergic reactions to KeryFlex. If you know that you’re sensitive or allergic to any substances, please let us know so we can pursue other treatments.

That said, for the majority of people with fungal toenails, KeryFlex is a great option. They look like real nails, feel like real nails, and give you the confidence you need to go out and enjoy the summer worry-free while we treat the underlying infection.

For more information, or to schedule an appointment with Dr. Birnbaum at our office in Spring Valley, give us a call today at (845) 352-7507.